Please join us for the centerpiece of our Conference, a moving tribute to those individuals who have been nominated and selected by their peers for extraordinary service in the opioid treatment community. These successful Award recipients have devoted themselves to improving the lives of patients in our treatment system. Dr. Vincent Dole and Dr. Marie Nyswander were the first recipients of this Award in 1983. The Association has been responsible for bestowing this honor since the first Regional Conference of 1984 in New York.

FRIEND OF THE FIELD AWARD
The prestigious Friend of the Field Award was established by AATOD’s Board of Directors. This award recognizes extraordinary contributions to the fi eld of opioid treatment by an individual whose work, although not directly related to opioid treatment, has had a signifi cant impact on our fi eld. The 2018 Friend of the Field Award has been awarded to:

RICHARD LANE/ROBERT HOLDEN PATIENT ADVOCACY AWARD
Richard Lane was a long-term heroin user who, upon release from prison in 1967, was instrumental in establishing one of the Nation’s fi rst methadone treatment programs. In 1974, he became the Executive Director of Man Alive and later served as Vice President of the American Methadone Treatment Association and as Vice Chairman of the Governor’s Council on Alcohol and Drug Abuse in Maryland. Mr. Lane was a passionate advocate for methadone treatment and, by disclosing his own treatment experiences, provided inspiration to patients and colleagues alike. Robert Holden was also a recovering heroin user, who later became the Director of PIDARC, an outpatient methadone treatment program in the District of Columbia. He later served as the Vice President of AATOD, succeeding Richard Lane’s term of office. This award was established in 1995 and recognizes extraordinary achievements in patient advocacy.

Register Now for the 2018 AATOD Conference. 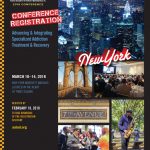